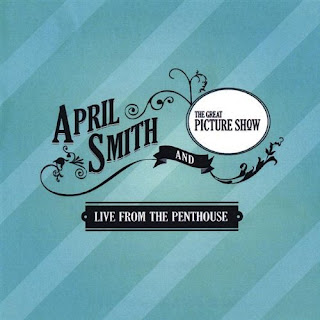 Let me preface this review by mentioning I just finished reading “Why We Hate Us” by Dick Meyer. Meyer’s objective is to detail the various reasons Americans seem to be mired in a culture of self-loathing, isolation, and detachment. His main culprits are the usual suspects: media, the breakdown of communities, government betrayal, intellectual trends like relativism and postmodernism, the “me” decade, consumerism, materialism, vanity, and suburban sprawl. The book is rather lightweight, but it’s a brisk, entertaining read.


What does any of this have to do with April Smith though? Well, two of the qualities Meyer extols in his book are authenticity and the pursuit of excellence. He argues that years of exposure to hipster irony and “phony” people (who are either too afraid or too jaded to commit to anything), has created a widespread thirst for authenticity and excellence. Simply put, people are tired of the attitude that it’s “not cool to care about anything.” It’s not that people need to be super-serious or crave constant earnestness; they just want to hear something “real” which has the guts to say what it feels and truly aspires to greatness.


I’m here to tell you that April Smith’s music is the real deal, folks.


On “Live from the Penthouse,” April and her bandmates are not afraid to embrace trends and styles from earlier in the 20th century (most of the tunes on “LFTP” have a vaguely 30’s and 40’s jazz or blues vibe about them) but – and here’s the amazing part – there is not a single “wink wink, nudge nudge” moment on the whole disc. That is, the retro stylings are merely incorporated into the seamless fabric of the music. There is no attempt by Smith or her cronies to distance themselves from what they are doing by using quotes or acting like it’s all a clever put-on.


Similarly, they don’t carry on (at least not audibly) like jazz-o-philes who intend to slay us with their killer chops and reverent recreation of a bygone era, nor do they want to force “important music” on us, or anything cloying like that. The music simply is what it is, no more and no less. And the music on this disc is damn good enough to stand on its own merits without additional layers of subtext. Ironically, this approach makes “Live from the Penthouse” sound less dated than some CD’s that came out last week: Smith’s sound is both timeless AND cutting edge.


If you doubt me, throw this disc into your player and cue up “Beloved,” a piano-backed torch song on which Ms. Smith professes her devotion to a recently deceased lover, telling him she’ll “gladly settle” for his ghost if she can’t “have the real thing.” Sounds goofy right? On paper it probably IS goofy to anyone who hasn’t seen “The Notebook” 16 times (including twice on opening night). But I’ll be DAMNED if Smith and her band SELL this song.


“Beloved” is very tastefully done, never going over the top or trying to force emotion out of the listener. Smith’s voice – tender, aching AND powerful throughout – ascends to the highest notes of her register like she’s literally trying to reach into the ether and pull her lost lover back to earth. In fact, “Beloved” is one of those songs that’s SO intense in the raw emotion being conveyed that I found it nearly uncomfortable to listen to. And yeah, that’s a compliment, folks.


Most singers/musicians/songwriters could never pull off a song like “Beloved.” Given the basic premise, they’d probably opt for maudlin bombast or possibly clever self-awareness and still come off badly. April Smith inhabits every note of the song without fear, imbuing each word with just the right amount of passion and emotional nuance. It’s the kind of performance that stems from excellence, and the kind of artistic bravery borne of authenticity. Yes, “Beloved” is just a song, but it’s a damn great song, and April Smith accords her composition the respect it deserves.


However, lest you think “Live from the Penthouse” is all moody paeans to ghost lovers in the sky, let me assure you there are quite a few jaunty numbers here as well, like the playful “Wow and Flutter” and the sea-shanty-ish sing-along “Colors.” The latter boasts an ebullient kazoo solo (!) and casts April Smith in the role of modern-day, morale-boosting Andrew Sister. It is quite refreshing to hear, in 2009 no less, someone who writes a (non-ironic) song dedicated to U.S. troops while at the same time eschewing mawkish sentimentality and/or bitter, protesting lyrics.


That is not to say Ms. Smith doesn’t have a political viewpoint – I think it’s safe to assume she does – but any politics one might glean from a track like “Colors” are made all the more potent by Smith’s artistic decision to take the high road and “play it straight.” Imagine if such a song were written and performed by, say, Nellie McKay. Do you honestly think McKay could resist the temptation to throw in a couple of lines about the horrors of war (as if we don’t already know them), or knowingly wink at the audience while she delivers her “faithful ode”? I could be wrong, but my guess is no. Smith gives herself, and her audience, much more credit than that.


It’s also important to note that while Smith does play characters in her songs, she never lapses into caricature or sounds affected. While there are some sultry tones here and there, Smith never resorts to pussycat growls or high-pitched “Betty Boop” vocals (for example) in a dubious attempt to sound sexy or to “send up” someone’s antiquated idea of female sexuality. Instead, Smith simply uses her god-given vocal prowess to sing the living hell out of everything she writes.


The vocals on LFTP are so good, in fact, that one hopes Smith’s vocal chops don’t one day end up overshadowing her formidable songwriting skill. I say this because some of Smith’s tunes are so well-crafted they damn-near qualify for “standard” status. (“Bright White Jackets” from her debut CD is a prime example.) You might think that’s hyperbole, but pound for pound, ounce for ounce, there is no discernible difference in quality between some of Smith’s tunes and many of the “timeless classics” I’ve heard over the years. Am I an uncultured slob, or is April Smith just THAT good? Maybe both.


Yeah, April Smith and the Great Picture Show are the real deal folks. And much like obscenity, I may not be able to fully define “real,” but I know it when I hear it. “Live from the Penthouse” is so good, it’s obscene.