Review: The Damned, So Who's Paranoid? (English Channel)

Hey there music fans! This month, in honor of my being a big ol' lazy-ass, I'll be taking a break and turning over the reviewing reins to our special guest critic, the editor of "Real Punk!!!" magazine, Dickie "Mashpit" (???) Moroney. Take it away, Dickie! 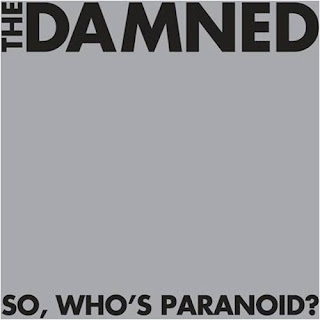 Ever since Green Day single-handedly invented punk rock way, WAY back in 1994 (thereby giving skateboarders something to listen to at the mall and obliterating boring, corporate rock bands like The Pixies and The Dead Milkmen), it really ruffles my hoodie when some new, loser no-talents come along and try to mess with the seminal templates put forth by the great-granddaddies of punk: Offspring, AFI, Good Charlotte, and the all-mighty Blink-182. For example, take these jokers, THE DAMNED, and what I believe to be their first album, "So Who's Paranoid?"


OY! Where to start? First of all, let's take the name, "The Damned." Yeah, real original guys. It kinda makes me wanna ask these fakes, "Hey you posables, haven't you ever heard of "Damn YANKEES? Or the "DamnWELLS?" Sheeesh, maybe they should have checked allmusic guide before trying to steal some of Ted Nugent's muted thunder. But don't be fooled! There's nothing on this CD that sounds ANYTHING like "High Enough" by Damn Yankees (who, I believe, invented heavy metal and strip clubs, according to Wikipedia).


No, instead of something cool like that, or anything approaching PURE punk rock like the kind Bowling for Soup do so well it's like they just pulled it out of their collective asses, we get an hour or so of some wretched PUNK-GOTH-PSYCHEDELIA-ROCK bullcrap I can barely listen to, let alone describe, but god help me, I'll try.


First off, what is with the singer? Instead of singing in a nasally, super-cool-cause-it's-slightly-flat voice, this guy - Dave Vivian Vance or something - is actually SINGING at times! Yeah, you heard me right; he's doing a weird croony thing and singing melodies that actually sound inventive and different from one song to the next. I mean, what the F**K??? I don't know about you folks, but I'm not happy if my punk songs don't all have identical, interchangeable, shouty vocals, especially in the "we-must-get-this-song-played-on-corporate-radio-at-all-costs-so-screw-musical-integrity" chorus.


Not only that, but this "Dave" guy doesn't randomly scream from time to time like he's literally trying to tear his vocal cords in two and generate some artificial punk "intensity." Oh sure, he shouts, but he only does it when - get this - he has a reason to! This lame-o actually has a theatrical/campy goth vibe, like someone who's watched too many b-grade horror films. And when I say "horror films," I mean the old black and white crap with people like Boris Carlott, Peter Cushion, and Dick Chaney Jr.; I'm not talking about the totally rad new stuff like "Hostel 2" or "Turistas."


Anyway, I could almost bear the gothic thing D.V.'s got going, but the dude goes about it all wrong. Instead of sounding all super-serious and overly-important when he sings (like he might off himself or the listener at any moment), this tool actually has a sense of humor about what he's doing, like he's in on the joke. WHAT??? NONONO! That's ALL WRONG!!! If you're gonna go dark, you gotta make sure you're dangerously close to lapsing into unintentional self-parody at any second.


I could swear this "Dave" fellow thinks that punk rock is about crafting your own eclectic style, rather than following the iron-clad rules laid down by cool trailblazers like Fall Out Boy. Damn, at least Fall Out Boy have a wide assortment of bad-ass t-shirts and backpack pins down at Hot Topic, which means they must be good.


However, even worse than the singing on "So, Who's Paranoid?" is the horrendous music underneath it. For the most part, this stuff is like hooky garage rock and tripped-out psychedelia performed with raucous punk energy and delivered with a slightly dark edge. I know, SOUNDS TERRIBLE RIGHT??? GAKKK!!! Who wants to listen to clever chord patterns when Green Day has just re-released "Dookie" (renamed "21st Century Breakdown") for the 8th time in a row??? Who wants songs stuck in their head for days on end??? Man, I've got to clear out any extra cerebral space ASAP so I have room for the 75 or so rocking new tunes the record companies want me to download this week. Now you know why these "Damned" guys ain't on a major label, like all great punk bands.


Seriously, track after annoying track on this CD just reeks of tunefulness and cool, fuzzed-out guitar riffs. Not only that, but there's all kinds of weird sounds that should never be on a "punk" album (according to my friends), like rock organs and bells and handclaps and Brighton-gay-men's choirs, and HELL, if I didn't know better, I'd swear these guys are trying to expand their musical palette by even listening to classical from time to time!!! I think they need to put away anything from the "Romantic" period and spend a little more time listening to My Chemical Romance, if you know what I mean.


So, there you have it: "So Who's Paranoid" by this week's flash-in-the-pan punk band "The Damned" is a total misfire. Hummable and catchy, yes, but, COME ON! There's literally not ONE song on here that, with a little bit of tweaking to the arrangement, could be turned into a full-blown top 40 hit for Pink. And that's just not punk rock, man.


And what's with the guy in the red beret? What a winker.


Nite Owl note: Despite what our guest reviewer thinks, my own personal ranking of "So Who's Paranoid" by punk legends the Damned is:

Very interesting observations. I cannot disagree with your opinions, however I can offer some dissent as to what 'punk' is and maybe what it is not. I can also stick up for The Damned, a great band. Be back soon...