Rabbit Velvet is the newest project by Danielle Kimak Stauss, formerly of the band The Lost Patrol. A word of caution: this is not an album that you throw on and listen to while you clean your room or balance your checkbook. No, this is a well-crafted masterpiece that demands your undivided attention. The album unfolds like a psychological thriller; like imaginative faeries from some aquamarine universe constructing a lush heavenly daydream filled with shimmering rain storms and ruled by a stunning muse. 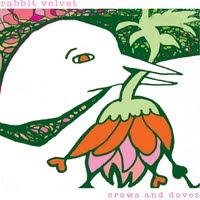 “Crows and Doves” opens with a blaring klaxon which creates a sense of urgency that is offset by the relaxed sweet rhythms of “Right Now”. Stauss spells out C-A-R-P-E –D-I-E-M juxtaposed with an up tempo drum beat that suggests a carefree attitude but belies a darker hidden tone. Why are we living for today? Is it because something bad is about to happen tomorrow? And did that shadow just move?


The album slithers on to “The Sun Rose Grey”, a surreal blend of Lalo Schifrinesque spy guitar entangled in a cocoon of synth and driven by relentless staccato percussion. It’s one of the many songs that you will want to enjoy again and again.


The horns of “Flying Over London” signal a departure of sound and tone. One gets the feeling of absolute freedom while soaring over a sleepy London at daybreak before the city awakens to the quiet desperation of every day life.


Another standout is “Haarlem Haunt”, a dark love song where Stauss’ vocals are a wraithlike delicacy that nimbly lure you deep into a fever dream from which you will never want to leave.


“Twilight to Sunrise” sounds like the angelic lost companion to “Days of Future Passed”, happily nestled between “Forever Afternoon” and “Time to Get Away”. Although this album does not quite have the magnificent scope of “Days”, the creative energy and the sheer opulence of Stauss’ voice makes up for the lack of an orchestra. Her vocals are pure shadowy liquid passion, like a thing alive; haunting, seductive and elusive.

There is so much to enjoy on this album. Stauss has created a brilliant work that harkens back to a time when people sat and listened to an album. So if you are looking for an album to listen to, and I mean really listen to, the way people used to sit down and listen to a vinyl record; then this album is for you.


-Leo Zaccari teaches History at Brookdale Community College, Kean University, and Ocean County College. He once knew someone who once knew David Bowie. In his spare time he writes. A lot.
Posted by NiteOwlz / Glenn Page Music at 5/10/2011